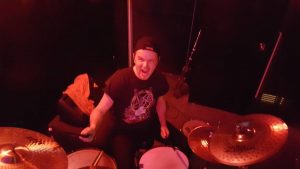 Leighton originates from the U.K. where he acquired the majority of his musical influences at an early age, ranging from The Beatles, the Police, Sex Pistols, The Who, The Clash through to Metallica and Slipknot!

Physicist by trade but quickly moved into finance and has not looked back since! He currently works for a Hedge Fund in NYC by day and Drummer by night!

He is an original founding member of Gamblers Ruin. Met Mr. G in 2007 at Midtown West studios Manhattan and the band was formed!

Can shred on guitar when he feels like it!